Reinventing the wheel (or hook)

Back in November 2019, I noticed a somewhat awkward description of a Roman object on the PAS database (SOM-EFC2F3). Although the object was correctly identified as a 'lamp hook', there seemed to be some doubt and some sort of medical implement was offered as an alternative.


"The finder has suggested that the artefact may instead have been a medical implement. The small diameter of the hooks, their position, with one curving up and one down, and the small suspension loop, all suggest it would be hard to securely suspend a lamp calling in to doubt the existing interpretation."

I used the 'Report a mistake' button at the bottom of the PAS page. I pointed out that the object was indeed undoubtedly a lamp hook and that the confusion may have been due to the fact that the hook was depicted upside down. 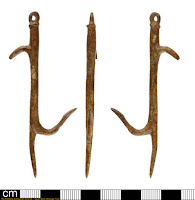 It's not a fish hook - designed to dangle in a river. It's a suspension hook - much like that on a coat hanger - designed to hang something from a peg or whatever. The object is much easier to understand when it's the right way up. 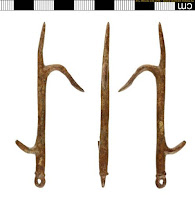 The object was not hung from the "suspension loop" (the hole is at the bottom of the object, not "at its top"); it was hung from the large hook near the top and a lamp would have been attached by chains to the hole at the bottom. An example on my website explains their use in more detail.

And as proof of their use, there are many lamps where the hook is still attached. Here are two museum examples. 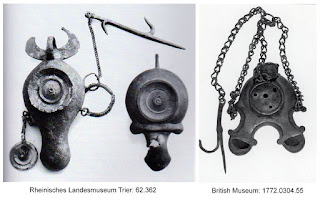 I received a cordial reply from the FLO. She thanked me and stated she would amend the PAS record. That was back in November but I imagine both the backlog of other work and the disruption of COVID-19 have since delayed that intention.

In the meantime, I have posted this as a reminder to anyone else who is puzzled by such objects. There's no need to reinvent the wheel; the research has already been done long ago and the hooks get a chapter all to themselves in D.M. Bailey, A Catalogue of Lamps in the British Museum, Vol. IV, 1996.