Art vs Artefact: a deceptive distinction in approach 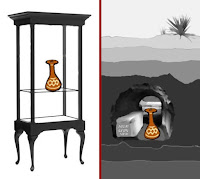 I note a rather sumptuous guide to the treasures of the al-Sabah Collection in Kuwait (billed as "one of the world’s most spectacular collections of eastern Hellenistic and pre-Islamic precious metalwork") has recently been published under the title Arts of the Hellenized East (Thames & Hudson, December 2015). I also note that the collection has received some criticism for the lack of attention to its provenance. Perhaps that flaw is reflected in the title of the guide.

I do cringe at the use of the word "arts" to describe ancient objects. The word can have a wide meaning but it is popularly associated with fine craftsmanship and is much beloved by certain museums that restrict their holdings to only the flashiest examples of any type, perhaps because it is well suited to that pompous, selective and superficial approach to history. By definition, it focuses attention on the objects themselves - almost as if they existed in a vacuum to be admired for their beauty and artistry alone - and thus tends to sideline their deeper historical and social significance. In such "arts" centric frameworks, the objects are very often presented as though even their wider context were worthy only of a mere label or footnote and their immediate context were of no interest at all.

Small wonder then that, unless it entails the name of an impressive former owner, the concept of provenance typically holds little meaning to the people who form collections largely predicated on treating objects in that manner: primarily as "arts" in its narrowest sense rather than their role as artefacts in a much broader picture. The production of a scholarly guide comes a bit too late to rectify that concern; the objects have long been divorced from firm contexts which could have told us so much more than retrospective conjecture or how "spectacular" they are.