An article in a British tabloid ("Is there a fortune buried in your back garden? As metal detector sales soar, we join Britain's treasure-hunting boom", Daily Mail, 22 December 2015) - brazenly in the "Money" section - has elicited an enthusiastically approving response from an American coin dealer that the world of metal detecting is "not what Barfy would have us think it is" (presumably referring to criticisms of some of the more thoughtless aspects of the hobby by Paul Barford).

Indeed, I'm sure the dealer is quite right ... because Ruth Lythe, a writer for the Daily Mail, knows far more about archaeology than archaeologists. The best way to discover our past is for tens of thousands of people to dig up as many metal bits out of the ground as fast as they can in the hope of finding treasure and making a fortune. How could any archaeologist or historian possibly object to that?

(For those unfamiliar with British humour, I'll provide a hint that there may be a degree of sarcasm hidden in my post.)

The REAL meaning of "primary source" 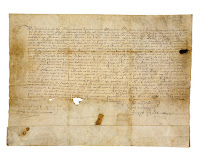 Ah, I made the mistake of assuming that Dave Welsh (the "owner of Classical Coins" referred to in my previous post) knew what the phrase ""primary source" meant. He didn't. Since his response to my blog post was on a members-only list, I'll quote only a tiny extract:

"[Primary source] means "a source of the first order of importance." That specific meaning is well understood among historians. Knell perhaps did misunderstand its meaning, not being a historian."

I'm never quite sure which irritates me more: the fact that so many of Welsh's statements are utter rubbish or the smug conviction used to state them. At any rate, as usual, he is quite wrong.

Since other people may also be unfamiliar with the historiographical phrase, I'll try to clarify it ...

To an historian, the phrase "primary source" means only one thing and one thing only: the earliest evidence extant (e.g. an artefact or a document). Such evidence is typically, though not invariably (Ambraseys, Melville and Adams 1994), original.

While such evidence would normally rank first in order of preference to historians seeking reliable material, the word "primary" in the phrase has nothing to do with that rank. The word refers solely to the fact that, unlike a secondary source, the evidence is as close to the matter being examined as possible.

Nor does the phrase necessarily correlate to the "order of importance" in the composition of a work. A scholar compiling a history of, say, a town may find that by far the most important source for his narrative is earlier published books but, unless they are first-hand accounts, they are unlikely to be a "primary source" - whereas a tatty old deed, verifying a minor event so incidental that it warrants only a footnote, would be.

The sole criterion for "primary source" is the degree of originality, not importance. The fact that the source is original, and therefore more reliable, may well be of huge importance - provided that it imparts information of value - but that importance is not what defines it as "primary".

The real meaning of the phrase is indeed "well understood among historians". To turn the snide comment made by the owner of Classical Coins back on him: Welsh certainly did misunderstand its meaning, not being a person in the habit of bothering to check facts before making statements.

Sadly, it seems he knows as much about historiography as he does about archaeology. And the blindingly obvious fact that archaeological materials provide a major source of original evidence highlights the insanity of his remark that "archaeology is not a primary source for the development of history".

Both archaeology and numismatics can provide a "primary source" for historians. It's not some kind of bizarre competition - but I'll explore that fantasy contest in another post ...

A classic from Classical Coins

As someone who ardently supports the private ownership of some antiquities, I cringe almost visibly when an individual who one would think also supports that belief makes such a stunningly brainless remark that the general public would be forgiven for wondering whether private individuals should be entrusted with being allowed to dress themselves let alone own an antiquity.

Some remarks are so outstanding in the sheer plumbless depth of their nonsense that they deserve an award at least for their entertainment value if nothing else. There would be no shortage of candidates, particularly among those made by some members of the ACCG, but a strong contender for this year's nomination must be this recent pronouncement by the owner of Classical Coins:

"... archaeology is not a primary source for the development of history, while numismatics certainly is."

I'll just leave that there - with little further comment - for the sublime majesty of its jaw-dropping inanity to fully sink in.

I'll merely note that 'history' is a rather broad concept - and involves somewhat more than only kings, queens and politics. For instance, while archaeological research has frequently played an invaluable part in compiling studies of past interiors in my own sector of social history, I'm scratching my head trying to recall when coins played any part in it at all. But my distress is minor; it must baffle the owner of Classical Coins to distraction trying to work out how on earth historians have somehow managed to know so much about ancient societies such as early pharaonic Egypt or Minoan Crete before coins were even invented.

If readers are unsure of the meaning of "primary source", please see my explanation.

Yugoslavia anyone? A future for Syria and Iraq ... 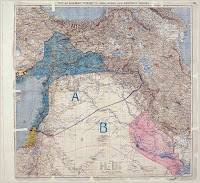 Hmm, so the West (Britain and France) created two huge artificial political "nations" named Syria and Iraq by simplistically drawing lines on a map during and after World War I - largely based on competing imperialist claims to oil but almost completely ignoring the ancient tribal/cultural differences of the regions within those artificial "nations" they created. And now, surprised at the lack of homogeneity and the inherent violent internal rivalry caused or inflamed by their short-sighted creation and exacerbated even further by their bungled attempts to "fix" what was already wrong to begin with, the West's proposed solution is to simply bomb one of the most bitter factions into submission.

Yeah right, like that's gonna work ... because a sure way to stop people being bitter about perceived inequality and injustice - so bitter in fact that their desperate situation provides a fertile breeding ground for extremists to gain power - is to make them even more bitter.

'Islamic State' is a symptom of the frustration of that wider faction, not the cause. A lasting solution to the crisis in Syria and Iraq can only be achieved by addressing some of the basic causes of the bitterness and hostility rather than merely snipping at the symptoms. One of those causes was compounded by the political insensitivity of the West in the early 20th century.

Nations that have formed and evolved naturally over the ages tend to have done so because the overwhelming majority of its population throughout its territory broadly shares a common culture. But a "nation" created artificially by outside powers may have no such natural unity. The fabrication of arbitrary political boundaries that ignore substantial internal populations of opposing cultures can so easily be a recipe for injustice, violent friction and even genocide. Where the government of that "nation" is a dictatorship, the result can be humanitarian disaster and even where it is ostensibly a democracy, the result can be the subjugation of a very sizeable minority to the overall will of a hostile majority and widespread abuse.

There may come a time when Syria and Iraq can overcome the difficulties of fairly and peacefully accommodating a diverse population but, in the meantime, it may be worth considering proposals to divide the territory at least temporarily into districts that more sensitively reflect the current gulfs.

But I guess bombing people is so much easier than the West admitting the borders were totally mucked up in the first place, helping to renegotiate them properly and sensibly to reflect the reality of people rather than just oil this time around, and redrawing the stupid map.

Yugoslavia anyone? Maps - and the practice of lumping inherently incompatible cultures all together into the artificial "nations" created by them - are NOT immutable. When the old cartographic divisions so obviously ain't working and instead are causing human suffering on a massive scale, change them!

My apologies for veering from the primary topic of this blog but I am somewhat irritated by the reluctance of the West to fully acknowledge its part in contributing to this situation and to take responsibility for helping to resolve it in a sensible manner.