After seizing antiquities in a raid at Deir ez-Zor in Syria, it seems the US Government handed over ALL the items to Iraq in a well-publicised ceremony.

One problem with that ceremony is highlighted by a lamp displayed with other items on a triangular blue sheet in one of the photographs (see image). It appears to be authentic and is a Syro-Palestinian type of the 3rd - 4th centuries AD. In other words, the lamp which was seized in Syria is likely to have been made and found in Syria.

The bits and bobs handed over to Iraq are a strange assortment - including a tiny fake bust of Nefertiti, a modern metal-smelting crucible, a leather manuscript in Aramaic, pieces looted from Mosul Museum, Islamic coins, and so on. After a proper analysis of what the items really are, it is intended that any Syrian antiquities will eventually be transferred on to Syria.

Paul Barford and Sam Hardy have covered this topic in admirable depth.

Blogwarts: the fantasy world of blogging in California 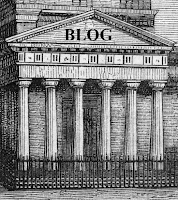 You thought 19th-century pomposity was long dead after a hundred years? Think again. It lives on in a certain blog (and it just cracks me up sometimes!). The blog is run by Dave Welsh, an engineer who lives in California and deals in coins - the same ACCG member who in all seriousness refuses to accept that the looting of antiquities is primarily driven by those who pay for them. He, backed by a coin-collecting lawyer and a metal detectorist, insists that anyone who presumes to oppose his views about ancient artefacts must be able to prove they are nothing less than a qualified archaeologist with a plethora of diplomas before they are even allowed to speak.

Indeed, those who engage with his fantasy world may be excused for hallucinating that they are not that far from a snooty version of Hogwarts under Dolores Umbridge. To appreciate the full majesty of his blog, we have to understand that Welsh regards his blog not as a mere digital platform for his opinions but as some kind of august institution where he reigns as provost and a select few who fall in line with the institution's way of thinking are admitted as fellows or adulating students (presumably suitably attired in its regalia while sitting at their laptops).

After a personal attack on the credentials of Paul Barford (déjà vu?), he graciously granted him permission to enter the institution briefly and reply as a "guest". Welsh posted a special notice - grandly entitled "Comments Policy Exception" - in what to mere mortals like you or me would be just a blog comment. Under the title, in characteristically sententious and laboured prose reminiscent of a 19th-century schoolmarm, he solemnly announced the official edict to the gathered assembly:

"I have decided to permit Mr. Barford's comments to be published here even though I consider them to contravene the policy of this blog that comments must shed more light, not more heat, upon the subject of the discussion. This is an important subject, and Mr. Barford must be given every opportunity to defend his position, even if his remarks transgress blog policy.

"This is a one-time exception and it is not likely that I will extend it to other subjects Mr. Barford may be interested in commenting upon. He must realize that commenters are guests, and have an obligation to "follow the rules" of the venue. Mr. Barford does not determine the rules here, nor does anyone else who comments to my blog."

I gather that even if the "subject of the discussion" in this august institution is nothing less than a personal attack ("heat" itself surely?), the person discussed should think it a deep privilege to be allowed to enter its hallowed portals and be granted permission to speak. Ah, and there was innocent 21st-century me, naively thinking a blog was just a blog. I feel truly humbled.

But on a serious note: I am avidly in favour of an intelligent and thoughtful approach to collecting antiquities and thus protect its future. Do these people really think that posing as some pompous institution and fatuously inviting ridicule is the best way to promote its image?

Barford has also replied here and here on his own blog - though be warned: readers may find its more relaxed "policy" and down-to-earth format a shocking return to reality.