Putting the Parthenon Marbles into perspective 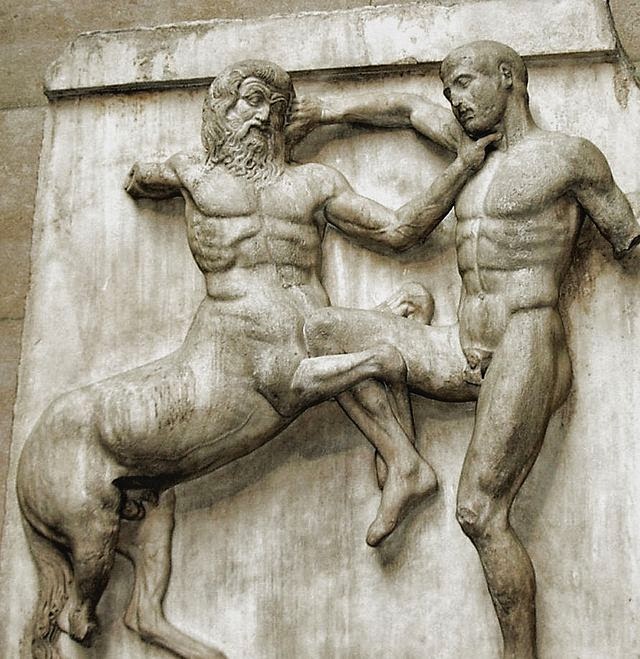 In an online discussion stimulated by the recent news that one of the Parthenon marbles has been loaned to Russia, one person posed the following question:

"Question: What happened to the 'missing pieces' of the figures?"

An excellent question. A large number of the marbles had already been damaged, defaced, pillaged, reused as building material or ground down to make cement by the time Lord Elgin saw what remained and I imagine many of the pieces he took may have suffered further or met a similar fate if they had been left behind.

In 1816 Elgin noted: "Every traveller coming added to the general defacement of the statuary in his reach: there are now in London pieces broken off within our day. And the Turks have been continually defacing the heads; and in some instances they have actually acknowledged to me that they have pounded down the statues to convert them into mortar." (St Clair, Lord Elgin and the Marbles, OUP 1983, p.97)

That this was not a fabrication by Elgin is confirmed by earlier visitors. "In 1749 the traveller Dalton drew twelve figures in the west pediment of the Parthenon: by the time Lusieri arrived in 1800 there were only four. Five slabs of the frieze drawn by Stuart between 1750 and 1755 had completely disappeared. One slab of which a mould was taken by Fauvel as recently as 1790 was utterly destroyed. The metopes tell a similar story." (ibid.)

Let's be under no illusion. Elgin did not deface an intact or stable monument; by the time he arrived, the Parthenon was already disappearing at an alarming rate. Evidence indicates that neither the Turks nor most of the local Greeks were particularly bothered at the time (it was not until much later that the Greeks adopted the Parthenon as a national monument). It was a frantic race between the British and the French to grab what was left and save it from further damage; if the British had not taken the sculptures, the French would have. The British won. But there is much to suggest that the rivalry was more in the nature of who got the best trophy than who was more conscientious in matters of conservation.

The legality of Elgin's actions was contentious. He had a firman (letter of permission) issued in 1801 by the Turkish authorities but it was somewhat ambiguous and a letter he wrote to Spencer Perceval, the then Prime Minister, in 1811 suggests that Elgin was aware that he may have been going beyond its remit: "I had no advantage from the Turkish government beyond the Firman given equally to other English travellers. My successors in the Embassy could not obtain permission for the removal of what I had not myself taken away. And on Mr Adair's being officially instructed to apply in my favour, he understood, 'The Porte denied that the persons who had sold those marbles to me had any right to dispose of them'." (Hitchens, The Elgin Marbles: Should they be returned to Greece?, Verso 1997, p.38)

The reaction when the sculptures arrived in London was mixed. Byron famously condemned their removal from Athens as "Thy walls defaced, thy mouldering shrines removed by British hands"; Keats praised them as "Grecian grandeur".

I do not condone what Elgin did - his 'rescue' was undoubtedly not entirely altruistic, the legality of it was tenuous, and his methods caused horrendous damage to the remaining structure - but it is perhaps unfair to judge him by the standards of today. We can only speculate on what would have happened to the sculptures if the French had got them instead or if they had remained. But if they had remained, as Mary Beard has noted: "Whatever Elgin's motives, there is no doubt at all that he saved his sculpture from worse damage." (Beard 2011)

Meanwhile, the debate continues as to whether the sculptures should stay in London or now be returned to Athens ...

Why do museums hoard?

A resentment of museums* apparently stockpiling thousands of "surplus" artefacts rather than selling them and allowing private collectors to buy them is a recurring theme in the world of collectors of antiquities. It seems a valid concern at first glance but much of it is rooted in what I term OCM (object-centric myopia), thinking of artefacts merely as art objects rather than as part of a far wider picture, as research tools in understanding our past.

The following question asked recently on a forum is fairly typical and I'll try to answer it very briefly:


"I think any piece is better off in private hands if fairly insignificant, what would they do in museum warehouses, gather dust?"

In most cases the artefacts not on display do metaphorically just gather dust but they are normally available on request and, in theory at least, they are preserved (much like evidence from a crime scene) in case further research in the future may shed fresh light. Methodology and technology are constantly improving and, for instance, a present-day re-examination of pottery sherds kept from an excavation in, say, the 1930s may result in entirely different conclusions from the original ones. What may seem "minor" or "insignificant" now might well prove to be extremely valuable to future generations.

Nor is the fact that many of the artefacts are apparently "identical" a reason to dispose of "surplus" examples. The notion of a "duplicate" is just 'baseball card mentality', entrenched in thinking of artefacts as mere art objects to fill gaps in collections. There is no such thing as a "duplicate" in the conduct of archaeological inquiry. In the world of academic research, the very fact that many of the artefacts are seemingly alike can be invaluable in studies such as cultural development investigation or quantitative analysis.

For a very basic example, let's take a "minor" and "insignificant" artefact found in huge quantities. A study of Firmalampen (a type of Roman lamp) a few years ago (Schneider 1993) shattered some earlier theories, set new standards in classifying the type, and enabled far more accurate appraisal of those found in excavations (and thus the site itself). The study was based on an examination of hundreds of superficially similar lamps (both complete and bare fragments) kept in the storage of museums throughout parts of Western Europe. Verified knowledge of their findspot played a vital role and, since chemical analysis was involved, mere photographs were not sufficient. Of course, such a study would not have been possible if the lamps had been dispersed to the market decades ago.

Police forces store evidence, paleontologists store fossils, mineralogists store meteorites, archaeologists store sherds, and so on. It would be rather simplistic to assume they all do so out of a childish resentment of non-professionals or an addiction for compulsive hoarding. Who knows what fresh insights into our past those dozens of identical pots currently gathering dust may reveal in a few years time? But one thing is certain: future generations will not thank us for squandering them away just to please a few people today.

There may be room for museums deaccessioning in some cases but we do need to understand some of the reasons why they may be reluctant to do so. And in the meantime, it's worth bearing in mind that there are literally millions of artefacts already on the market or in private collections.