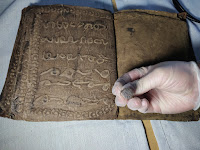 Further to my earlier post on the phenomenon of a constant stream of 'Golden Brownies' (GBs) emerging in Turkey, I note that yet another "Torah" (curious that almost all of these fake manuscripts are from religious minorities in that region) has been trumpeted in the Turkish press (Daily Sabah, 'Turkish police nab 3 suspects trying to sell ancient Torah for $1.25M', 25 March 2020; Hurriyet Daily News, 'Gendarmerie seizes historical Torah in Turkey’s Mus', undated). Not only is the object not even remotely a Torah (the first five books of Moses typically in scroll form), it is so obviously a modern piece of tat that a mere moggy can spot it as farcical.

Pages from another so-called "Torah", announced by the Daily Sabah in 2018 ...

Of particular concern is that the spurious imagery and concocted provenances of these GBs have been eagerly picked up by far-right conspiracy websites (such as The European Union Times) and heralded as confirmation that "Judaism is Satanism". Dr Sam Hardy has provided some interesting insights into the situation (Conflict Antiquities, 2 April 2020). (A link to the EU Times rant is included under Dr Hardy's blog post.)

I had initially assumed that the Satanic and Illuminati symbolism in these fake Turkish/Syrian manuscripts merely reflected the 'Jewish conspiracy' mythology endemic in that part of the world and accepted as fact by their ignorant non-Jewish authors. And thus, almost incidental to the main goal of making money from selling them.

However, I am now beginning to see that symbolism not as merely incidental but as at least one of the prime motivations for their manufacture in the first place - to present these supposedly ancient manuscripts as proof that the mythology is true.

Perhaps even more worrying than the fact that the GBs are being produced is the thought that the Turkish police and media are happily complicit in validating and publicising them. I have an uneasy feeling that their widespread publicity in that country is not so much a way of praising the police force.

Have any of these insanely-priced GBs ever actually been sold at all or were they intended to serve another purpose? It's strangely convenient that their purported "sellers" are constantly being caught, it's strangely unnatural that they are seldom found with anything else of remotely comparable value, and I sense a possibility that the whole operation may have been deliberately engineered as a sickening political tool - a devious way of covertly promulgating antisemitic propaganda in broad daylight. Any other artefacts supposedly "recovered" with the GBs would be merely 'smoke and mirrors'.

What better way to ensure support for an authoritarian regime than to stimulate mass fear of a 'hidden enemy'? It matters nothing that a few scholars recognise the fakery; the target is the general public and neither Turkey nor Syria will be the first country to fall for that fear tactic and endorse a tyrant.


Is apparently busting the illegal antiquities trade in Turkey really only a front for performing something far more sinister? Just a thought ...

Hey, David less of that "mere"! Or a big hefty black and white tom will be after you... Take care.

My apologies to him! If he's anything like my aunt's tom, I'd be terrified. That cat could drill holes into your skull just by looking at you!