Please Do NOT Wash 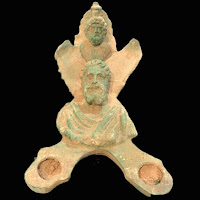 An eBay seller based in East Sussex states "Here for Sale is a Very High Quality Roman Bronze Double Spouted, Double Busted Oil Lamp. Dating From Around 200 - 400 AD" and makes an earnest plea to the successful buyer:

"Please Do NOT Wash as This May Cause Damage to The Item."

I can totally understand his worry. It must have taken ages to put all that fake orange crap on the item in the first place. It would be tragic to wash it off and reveal the brand new shiny metal underneath.

(A genuine patina would of course be unaffected by soap and water - and does not wash off.)

But perhaps more worryingly, the fact that the item doesn't even remotely resemble any real Roman lamp (or is even a decent replica) appears to be lost on the people bidding for it.

It's a trifle disconcerting to see how readily some people are parted from their money. I could understand someone willing to pay, say, £50 or even £60 for a really good-quality accurate replica of a Roman bronze lamp to use in an historical re-enactment - but that thing is nothing even remotely like a real Roman lamp. If they turned up with it in front of knowledgeable people, it would just be a laughing stock.

But then, perhaps I'm being too much of a purist. I watched a bit of the 2014 movie Exodus: Gods and Kings on TV last night and winced as I noticed the pharaoh was happily using Hellenistic lamps that hadn't even been invented until over a thousand years after the supposed events in the movie. I'm guessing Ridley Scott wasn't overly bothered by anachronisms.

The most disconcerting thought is the niggling suspicion that at least some of the people bidding for that eBay monstrosity were under the impression that it was actually genuine - despite clearly not having the vaguest idea of what a genuine example looks like. At that level of brainlessness, I imagine they would still be none the wiser even if they DID wash it and saw the brand new shiny metal underneath.

Sigh, I give up hope in humanity!