"There is no evidence" that these antiquities are fakes 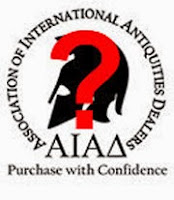 Let's be clear: the antiquities trade is notoriously plagued with fakes and some of them can be difficult to spot. Dealers in antiquities may handle hundreds or thousands of items over a long career and it is almost inevitable that even the most expert and honest dealer among them may inadvertently offer an occasional fake now and then. Even major museums can be fooled sometimes. But if common low-grade fakes or replicas that should not fool a myopic tourist persistently occur with tedious regularity among a dealer's stock, a line has been crossed. If that dealer has been in business for a very long time and we can reasonably expect them to have acquired a great deal of experience, we have to question not only the dealer's expertise but the honesty of their intentions. Such a scenario would undermine the credibility of the antiquities trade as a whole.

Back in April this year, after an earlier post querying some bronze lamps, I questioned several items that had appeared in the stock offered by Artemission, an antiquities business based in London and owned by Antoine Karawani, a committee member of the Association of International Antiquities Dealers (AIAD). In my April blog post I candidly but unwisely stated my opinion on the authenticity of those items. Artemission objected and asked Google, the blog host, to remove both the blog post itself and any links to it in its search results on the grounds that my post was "causing serious financial and reputation damage" and that it contained "defamatory and unsubstantiated remarks which are presented as ‘facts’ when there is no evidence to support the claims". Google complied.

Fair enough, I have no wish to damage an honest business. I will NOT state my opinion on the authenticity of those items. I will NOT make any "defamatory and unsubstantiated remarks". And, to avoid any unfair loading in search results, I will NOT even include the name of the company in the post title or URL.

Instead, I will merely present the same selection of seven items I queried in my original post (items sold as fakes or openly as replicas on eBay or other venues by other sellers are on the left, very similar items offered by Artemission are on the right) and just politely ask Mr Karawani himself to explain why he feels that his items (those on the right) are authentic. Perhaps my concern is misplaced. In the meantime, I will remain silent and make no comment one way or the other.

(Images can be enlarged by clicking on them.) 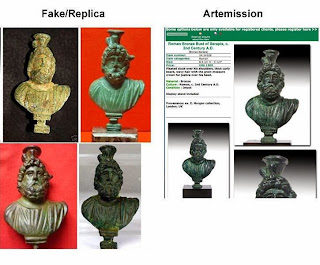 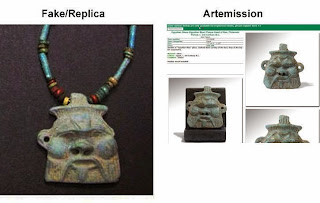 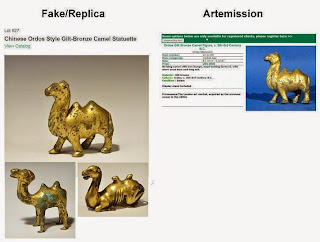 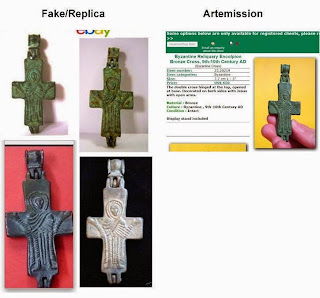 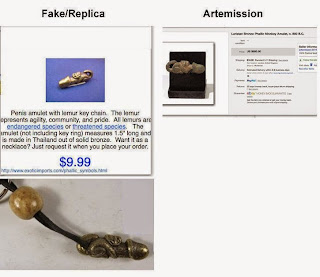 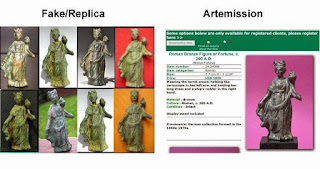 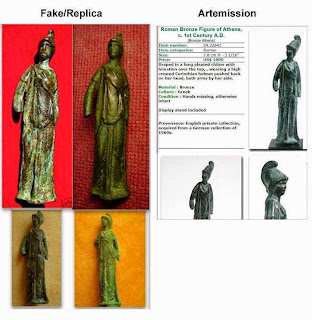 I'm hoping the owner of Artemission will be able to clarify the reasons for the worrying similarity and, while we're at it, perhaps he can also explain why the inscription on his example of an "incantation bowl" apparently lies OVER the burial deposits. I am familiar with these artefacts and I confess to being a little baffled. The inscription does not appear to be Aramaic as described and I would have thought that if it were contemporary with the bowl, the inscription would lie UNDER the deposits formed during burial. Just curious ... 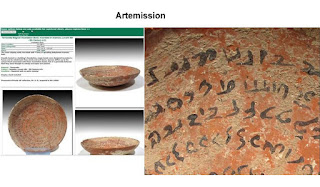 I am also curious about quite a few other items that have appeared in the stock of Artemission but Mr Karawani seems a little touchy about having his stock questioned so I'll just swallow my curiosity about those.

The legal complaint requesting removal of my original blog post asserted that "The individual(s) behind this link are intent on damaging our company". Not so. I should clarify that in fact I have absolutely no personal grudge against Mr Karawani (I have never met him) nor do I have the slightest personal interest in damaging his particular company (I am neither a rival dealer nor a disgruntled customer). I am utterly impartial. My blog is not intended as some kind of witch-hunt; any mention of individuals, companies or organisations in the posts is simply incidental to an overall theme.

My interest is in the image of the antiquities trade as a whole and, as I have previously done with other dealers (e.g. here and here), I reserve my right to question or criticise ANY member of that trade who in my opinion may not be helping that image. Mr Karawani is not only a member of the AIAD - an association prominently displaying the slogans "Purchase with Confidence, Trustworthy & Transparent Trading, Dependable Dealership, Reliability & Good Faith" - he is on the Executive Committee. The reputation of a member reflects not only on the credibility of the association to which he or she belongs but on that of the entire trade.

As I said, the antiquities trade is notoriously plagued with fakes. In common with merchandise such as fine art, autographs and other antiques, a key component in the financial value of an antiquity lies in its authenticity. A painting by Van Gogh or Picasso will not be accepted as authentic unless the dealer can prove beyond doubt that it is. The same must apply to an antiquity. It should not be a matter of having to provide evidence that an antiquity is fake; the onus must lie with the person selling the item to prove that it is not.

Nowadays, when scholars such as Elizabeth Marlowe and Oscar White Muscarella are questioning even museum objects unless they have a cast-iron provenance back to a documented excavation, the days of simply taking a dealer's word at face value are over. And when a dealer's response to questions is not to answer them but to simply stifle them by threatening legal action, the slogans of trade associations like the AIAD begin to look somewhat hollow and unconvincing. Is that the image the antiquities trade wishes to project?

Do such actions promote the aura of trade openness and transparency that conservationists have been campaigning for over the last few decades?

While I warmly welcome constructive comments from the owner of the business mentioned in this post, I would be grateful if other people refrain from passing any definitive judgement on his items in the meantime.

Note: Although made merely as a reproduction or tourist souvenir, an item becomes "fake" when deceptively offered as the real thing.