An interesting view of archaeology by Marc Balcells, a criminologist (December 2013). It compares the Hollywood version of archaeology ("treasure hunt") and the real thing ("study of remnants"). Naturally, real archaeology shares a vital component with criminology: the importance of evidence. 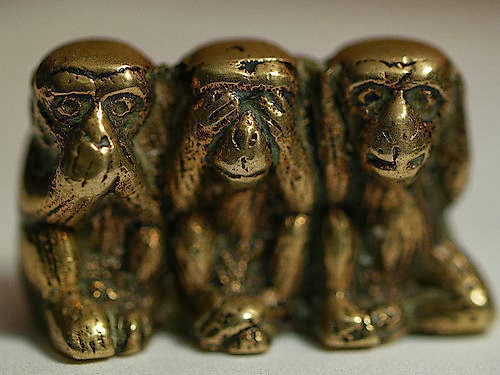 I recently commented on a recent attack on the credibility of archaeology by Peter Tompa, a lawyer associated with a coin dealers' lobby group (ACCG). Another comment, by an anonymous "wise collector friend from Chicago", included that hackneyed sentence:

I naturally pointed out that the phrase "to my knowledge" was merely a 'see no evil' attitude, a convenient means of salving his conscience while admitting that he really hadn't got the foggiest idea where the coin originated. Not many coin dealers include the words "looted" or "stolen" in their descriptions. Rather than sniping at archaeologists who want to prevent looting, the coin collector's energy would be better spent on nagging dealers to provide proper collecting histories for the things he bought.

My comments spawned a subsequent blog post by Peter Tompa on what it means to be an "ethical collector". He set up a false hypothesis that a collection can only be ethical if it meets the same standards that museums have adopted and is limited to items with a secure pre-1970 provenance. He postulated a flimsy claim that items recorded under PAS would not be acceptable and threw in a red herring (nothing to do with ethics) by questioning why objects legally available in other countries are not available in his own.

While expressing my support for private collecting, I pointed out that a collector should be ethical for its own sake, to avoid contributing to modern looting, even if their cut-off date for acquiring artefacts without a documented collecting history does not strictly adhere to the 1970 watershed advocated by the AIA and others. All I asked was that dealers provide a clear collecting history (provenance) for items so that buyers could distinguish between artefacts from old collections and those from fresh looting. I honestly think if I was any more laid back than that in my attitude to being an "ethical collector", I'd fall over!

"Dealers and collectors need to adopt a serious Code of Ethics for its own sake, even if it is only offered as a compromise, regardless of whether it pleases the AIA or not. Continue to arrogantly ignore the rest of society and contribute to wiping out the evidence of their history in a selfish pursuit of your own hobby without even a vague attempt to meet them halfway, and you will end up pissing off not only a few archaeologists but every thinking human being on the planet.

"I genuinely do support private collecting - and I really don't want to see its future wrecked by arrogant intransigence. We're not in 1950 anymore. The world has moved on."

Sadly, my attitude was met with ill-informed and tangential responses. Although the blog frequently attacks and attempts to discredit archaeology, the replies to my comments strongly suggested that the blogger has no idea what archaeology actually is (clue: it's the whole site, not just objects). The final comment by him sums it up ...

"The use of coins to date sites is limited given the long periods coins circulated and the fact that only coins from secure contexts have any value in dating artifacts."

Huh??? "The use of coins to date sites is limited given the long periods coins circulated ..." Really? Exactly how does that stop them providing a terminus post quem for a site?

"... and the fact that only coins from secure contexts have any value in dating artifacts."

Well, that's an own goal! It only reinforces the point I was making. Unless the collecting history (including precise details of findspot and excavation) of the coin is revealed, we will never know if it came from a secure context or not. The clandestine nature of looting destroys that information and looting itself destroys the context. And please try to understand archaeology. It is not the "artifacts" as such that we are trying to date; it is the stratigraphy of the site.

After suggesting that the bureaucracy in Bulgaria is extremely corrupt, he then makes the astonishing statement: "But the fact remains, ancient coin collecting is quite legal there. So why should we be holier than the pope [so] to speak?"

Er, I thought we were discussing ethics?! I accept that the blogger has little comprehension of archaeology but I was kind of hoping he would have at least a basic understanding of ethics.

Finally, the blogger compared furniture and coins, and their status as "cultural property". He does not appear to have grasped the fact that although the legality of respecting the claims of cultural property and the ethics of preserving the archaeological record may sometimes coincide, they are actually two very different things. The primary concern of an "ethical collector" is to avoid contributing to the destruction of the latter. It matters not an iota that ancient coins were "struck in multiples with thousands upon thousands and even millions of some issues still extant". It is not their quantity that poses a threat to the archaeological record; it is the fact that every time an ancient coin or other artefact is brutally dug out of its context (and the site typically trashed), the whole of humanity has been denied a rare chance to explore its history.

My plea that dealers provide a clear collecting history for items so that buyers can distinguish between artefacts from old collections and those from fresh looting continues to fall on deaf ears. Complacency with the current destructive status quo, arrogance against those who dare to challenge it, and contempt for the rest of society appear to be the hallmarks of many in a trade that seems determined to self-destruct.