An American coin dealer recently called my attention to an old paper that he helped to compose on behalf of the Ancient Coin Collectors Guild (ACCG) and challenged me to examine it on my blog, apparently under the impression that the paper was pretty much unassailable. He confidently assured me that it "was received with respect and interest by the Council for British Archaeology". I have now had time to read through it and my first comment is that the Brits can be disarmingly polite.

I note that this American "Newcastle Paper" was presented by the ACCG at a UK conference hosted by the Council for British Archaeology in March 2010 and has been reviewed previously. Even before slogging through its excessively exhaustive (and exhausting!) text, my first impression was not good. Its very title ("Coin Collectors and Cultural Property Nationalism") was ominous. The subsequent text deviously conflates two largely separate issues: a worthy struggle to seek a sensible and balanced solution in the sharing of international culture on the one hand, and a campaign to prolong a cavalier attitude to the destructive exploitation of foreign archaeological resources for commercial gain on the other. Disingenuously using the former to excuse the latter is not a great start.

Is the paper actually on behalf of "coin collectors" or is that term basically a euphemism for something else? Certainly, despite laboured assertions that the ACCG "is a collector organization, not a trade lobby" (p.44), its aims seem far more geared towards the mass acquisition of stock than the concerns of ethical individuals buying one or two coins. This is the organisation that declares its members "will not knowingly purchase coins illegally removed from scheduled archaeological sites" (p.45) while failing to admit the irony of simultaneously fighting against any measures (even self-regulatory ones) that would help ensure the stock of the dealers who supply them was not.

An early unwitting admission by contributor John Hooker that he hasn't got the vaguest clue what the full extent of "cultural heritage" actually is (p.5)1 sets the tone for much of the paper. It includes some valid and significant points but any overall case it tries to make to a naively miscalculated demographic is so compromised by a litany of schoolboy flaws - ranging from verbosity, waffle, repetition and tedious irrelevancies to shallow blame-shifting, inadequate denial (p.15), arrogant presumption (p.32), cringeworthy unawareness and stunning miscomprehension resulting from object-centric myopia, no conception of moral responsibility beyond the bare legal minimum, a long unsourced2 section plagiarised verbatim (!) from Wikipedia (pp.49-50), manipulated conflation, selective sycophancy and a plethora of glaring logical fallacies - that it tends to greatly diminish rather than enhance any perception of the trade as a worthwhile contributor in serious academic discussion.

A statement that "The collectors [read: US coin dealers] rights movement does not seek a confrontation, it seeks a solution" on the final page (p.61) begs a question: the "rights" to do what? To henceforth acquire stock responsibly by ensuring it does not conflict with archaeological concerns or to continue to acquire stock in the same cavalier way dealers did in the past and carry on encouraging looting until every last archaeological resource on the planet has been obliterated? The paper gives every indication that "rights" means the latter.

The paper includes not the slightest hint of compromise, not the vaguest trace of a realistic proposal to meet anyone halfway. Characteristically, it attempts to shift responsibility. An eager but wildly autoschediastic suggestion that a PAS-like scheme is a "viable model" (p.49) in countries that are incredibly rich in ancient sites reveals a simplistic object-centric approach oblivious to any potential for an archaeological catastrophe. Crucially, the paper includes not even, despite lip service (perhaps also cribbed from Wikipedia?), a real sign that the root problem is properly understood. Quite the contrary ...

The American coin dealer who brought the paper to my attention pointed out that "it was a statement of the pro-collecting point of view of the collectors' rights advocacy movement, rather than a completely impartial academic survey paper".

Fair enough, but it's one thing to display a certain amount of partiality. It's quite another to come out with daft nonsense such as holding an archaeologist up to ridicule for comparing ancient coins to "an endangered species" and then wordily pointing out how common they are (p.16) when it was blatantly obvious even from the quotation that he was talking only about coins that remained undisturbed in their context. Such silliness has a tendency to backfire - especially to an audience containing informed academics - and, instead of having the intended effect, implies that the person giving the presentation is either too thick to understand simple English or too ignorant to grasp even the most basic principle of archaeology. That impression is hardly helpful in promoting "the pro-collecting point of view".

And that's just one example of countless other faux pas in a long-winded but essentially slapdash paper that utterly drowns any valid points in a garrulous sea of uninformed blunders, contrived deceptions, plagiarised waffle and entrenched ignorance. Predictably, the end result paints an overwhelmingly negative picture of those engaged in the US coin trade.

I could very easily dismantle the "Newcastle Paper" through detailed analysis in another post but I post very seldom on my blog these days and I've already dealt with the ACCG earlier. Calling further attention to their inept propaganda merely highlights the worst aspects of a hobby I wholeheartedly support if carried out responsibly. In the interest of a balanced 'middle ground', if I post anything at all nowadays it is more likely to focus on some of the views expressed by those who oppose it. In the meantime, here's a gentle plea to the ACCG: either get your act together next time or do the collecting world a favour and give it a miss.


------------
1  In this alarming paradigm of tunnel vision, "cultural heritage" applies to objects that can be "distributed" but not to the once intact archaeological sites they are "distributed" from.
2  Wayback Machine reveals that the footnote given is just a deceptive red herring and not the real source. Perhaps the authors hoped no one would ever bother to check. Should we place a similar trust in any provenance they may give for a coin? 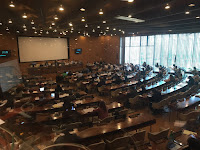 There appear to be common misconceptions about a Convention adopted at the 16th General Conference of UNESCO on 14 November 1970 in Paris. Its full - and somewhat unwieldy - title is 'Convention on the Means of Prohibiting and Preventing the Illicit Import, Export and Transfer of Ownership of Cultural Property'. (I'm hoping to propose a 'Convention on the Benefits of Not Trying to Cram an Entire Synopsis into a Title' at the next General Conference.) Its purpose was to combat the illicit trafficking of cultural property (including of course ancient artefacts).

The Convention came into force on 24 April 1972 but it is important to bear in mind that it was just an agreement and was not in itself a law. It was left up to individual nations to implement the Convention in their own laws upon ratifying or accepting it. Since laws are not usually retroactive, compliance with them typically dates from the year each of those laws was passed, not that of the Convention. A chronological list of the years that nations ratified or accepted the Convention is published on the UNESCO website.

Although many museums and other institutions have adopted the year 1970 as a cut-off point in the acquisition of antiquities, that year is purely voluntary - based on ethical rather than legal considerations. The Convention itself (Article 7a) advises that they should be prevented from acquiring cultural property which has been illegally exported after the date that both the country of origin and the country of the institution ratified or accepted the Convention. In the case of the UK acquiring an object from Turkey, for instance, that date would be 1 August 2002 (although Turkey ratified the Convention in 1981, it was not accepted by the UK until 21 years later). It is of course up to the institution to determine if an object is likely to contravene that rule and, as said, most set a much earlier date for ethical reasons.

A similar responsibility (and ethical awareness) is placed on dealers and collectors to ensure they do not acquire illicit cultural property (Article 5e). Although nations are exhorted to keep an up-to-date inventory of their national heritage (Article 5b), that cannot of course include individual objects as yet unknown in archaeological sites (Article 1c) and it is therefore incumbent on dealers and collectors to establish that an archaeological object was legally exported.

If a nation declares that its archaeological material is under threat of pillage, other signatories undertake to control international trade in the relevant material (Article 9). In the US, such measures are normally effected by means of a bilateral memorandum of understanding (MoU) under its implementation of the Convention (Convention on Cultural Property Implementation Act 1983). A summary of that Act is published by the US government.

The Convention also seeks to prohibit the import of cultural property stolen from a museum or similar institution or from a public monument (Article 7b), and return the property to its country of origin providing that it was documented and that compensation is paid where appropriate (the latter provision subject to certain conditions in the US). The UK stipulated that, in its own case, return was subject to its rules on limitation to claims (typically six years under the Limitation Act 1980).

As said, there appear to be common misconceptions about what the 1970 UNESCO Convention is and what it is not. This was recently highlighted by the comment submitted by an archaeologist to an online article regarding the questionable collecting habits of an elderly Australian digging up artefacts in the Middle East:


“The short answer is, yes, it was illegal [...] International law sets the deadline at 1970 — the date of the 1970 UNESCO Convention — for the removal of artifacts from the ground for collection. So if she began in 1967 and continued for 11 years (as the article states), then she was breaking the law.”

The archaeologist was right to be outraged but, in fact, he was wrong about the 1970 UNESCO Convention. It is not "international law". Nor is there any "deadline at 1970". Australia did not accept it until 1989. Neither of course does the Convention have anything to do directly with "the removal of artifacts from the ground for collection". As its full title suggests, it concerns import, export and transactions.

The laws that the elderly Australian was probably breaking were those of the countries she was digging in. Her blatant disregard of those laws is reprehensible but it is important to employ the correct framework to condemn its illegality. In the case of Australia, the pertinent legislation is the Protection of Movable Cultural Heritage Act 1986, which sets no time limit for "unlawful imports".