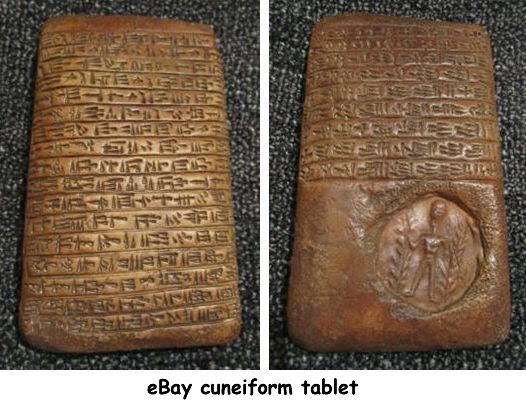 A nice big cuneiform tablet sold on eBay last month for £410 (approx. US $680) after a frenzied battle of bids from a starting price of 99p. The UK seller announced that the "tablet is part of a collection of tablets and clay figures purchased in 2013 from an antiquities dealer in Turkey". Before cracking open the bubbly however, the lucky buyer may want to consider two minor drawbacks to their purchase ...


Should the buyer eventually discover their purchase is just a piece of tourist tat and feel that £410 is a bit too much to pay for it, they have two options. They can just swallow their pride and live with it, or they can demand a refund through eBay on the grounds that the item was "not as described". Since the item was described as a "large near eastern old clay cuneiform tablet from mesopotamia", the latter option poses a problem. "Mesopotamia" is a bit vague; in its widest sense it can include part of Turkey. The word "old" is all relative; was the seller merely claiming the item was bought a few months ago? It could be argued that the tablet was exactly as described.

But hey, perhaps eBay does not have the same conception of legality as the rest of us and would uphold a refund based on the premise that the description was misleading. It would be interesting to know the outcome if a dispute is raised. In the meantime, we can all relax in the knowledge that many eBay buyers are cluelessly gobbling up tourist tat rather than encouraging looting by buying the real thing.

The seller has another tablet up for sale at the moment.