Ancient Greek Lamps: The Genius of the Central Tube

A distinctive feature of ancient Greek pottery lamps is the conical tube that began appearing in the centre of many of them towards the end of the 7th century BC. Its use has intrigued scholars for many years and various theories have been proposed.

At first, it seemed obvious that the lamps were designed to "fit on a peg" [1] or were mounted on the tapered spike of a stand. However, it was pointed out that such an arrangement would be "unstable" [2], some of the tubes are too angled or narrower at the bottom than at the top, and, crucially, examples of the tubes did not show any traces of the wear that would be expected on the inside. In short, although the tube may have sometimes allowed lamps to be mounted on a spike, that is unlikely to have been its primary function.

Perhaps the lit lamp was held aloft by a cord passing through the tube and knotted at its end? But it was noted that while that scenario could apply to lit lamps with evenly-spaced multiple nozzles, it would clearly unbalance lamps with a single one [3].

Another theory - that both the tubes and the closed cones found in contemporaneous lamps were intended as a method of reducing the amount of fuel the lamp could contain - strikes me as counter-intuitive and unlikely.

In fact, the central tube is likely to be a masterpiece of design ingenuity, a blend of form and function that any modern designer would be revered for. The clue to its probable true purpose lies not in what is present but in what is missing. Almost no lamps of this tubed type have a handle.

Handles on wheel-made lamps must be separately fashioned by hand and luted onto the body. The shallow depth of early lamps dictated a narrow point of contact. Their projecting nature made conventional handles vulnerable and, as evidence shows, they were easily broken. A fragile and unreliable handle was clearly an unwelcome risk while carrying a lit lamp and a more dependable method of holding it was needed.

The solution was to incorporate the method actually into the body. The central tube, typically with a fairly wide cavity under the base, is "simply a convenient finger hole to aid in grasping firmly and carrying safely a slippery lighted lamp" [4]. Indeed, placing the index finger under the base cavity and the thumb over the shoulder or the top of the tube provides a good grasp. The concept is much like that of the grip provided by the hollow indentation in the underside of mesomphalic phialai. 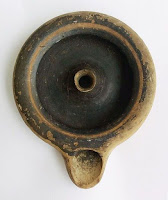 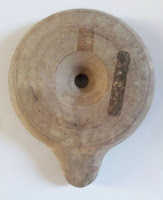 Not only did the tube provide the holding ability of conventional handles, it also offered another important part of their function. The same author suggested that the open tube would allow lamps to be hung on a cord [5], but not in the way previously suggested. This would not be while the lamps were lit and being used but while they were empty, perhaps when displayed for sale, in transit or in storage.

Spanner in the works?

At first glance, the fact that similar tubes occur on contemporaneous lamps having a fixed pedestal would seem to make all those proposals redundant and it has been suggested instead that the tube may have "provided an anchor for tying or wrapping the end of the wick" [6]. However, lamps on fixed pedestals are unusual and it may well be that they merely replicated the accepted standard design of lamps without them, regardless of whether the tube was fully functional - much like the relatively pointless solid lugs on pottery factory lamps replicated the pierced ones on metal lamps.

I believe some of the proposals advanced as an explanation of the central tube are still perfectly valid for common lamps: a means of improving the grip when carrying lamps that typically lacked a conventional handle, while also offering the options of hanging them on a cord when not in use or, indeed, perhaps occasionally mounting them on the tapered spike of a stand if desired.

Whatever advantages central tubes may have had, they were less suited to lamps that were evolving with deeper bodies and smaller filling-holes, and they gradually fell out of fashion. Nevertheless, the problem posed by conventional handles remained. As lamps generally became deeper and thus heavier, the typically horizontal handles of the period proved even less equal to the task [7]. The increased body height made handles that were attached vertically more viable but they too were vulnerable and a large proportion of lamps simply omitted handles altogether.

Lamps were being provided with a side lug by the end of the 4th century BC and although early examples are normally pierced and are likely to have been primarily intended to allow the lamp to be hung on a cord, unpierced asymmetrical lugs survived as a vestigial feature for over two hundred years. That seems to suggest that the protrusion may not have been always purely a hanging device on early lamps or always merely decorative on later ones but may also have been valued as a basic means of helping to improve the grip when carrying lamps that lacked a handle.

However, neither conventional handles nor lugs equal the classic elegance of the integral and symmetrical tube. The simple beauty of Athenian lamps of the Periclean period, with their fine black glaze and stylish design, is striking even today.