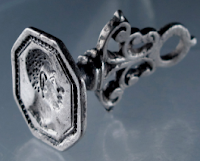 Ben Westwood, Finds Liaison Officer for Durham, Darlington & Teesside, has responded on Twitter to my earlier post about the silver seal from Shropshire. I'm grateful for his willingness to discuss the issue and his points deserve a thoughtful answer but rather than be constrained by the 280-character-per-tweet limit on Twitter I'll answer them here.


"I/we have no problem with debate or discussion, & don't always get things right. i'm very far from 'outraged' as your alternative interpretation, in fact i think it's very interesting."

Sorry if I misjudged your level of reaction but a series of no less than fourteen tweets which included the boast "Like it or not, we are experts in portable antiquities & artefacts" did give the impression that you were ever so slightly miffed.


"My problem, as i made clear was with the tone & offensive language used. describing a colleagues work as vacuous because you disagree with the way he has chosen to engage with current debate is a poor choice of words, especially given the context."

vacuous: showing a lack of thought

It was precisely "the way he has chosen to engage with current debate" that was vacuous. No matter how virtuous the cause, there is little excuse for a professional FLO to weave some wild fantasy around an artefact merely to fit topicality.

It doesn't require a great deal of 'thought' to show a tiny bit of sense and do at least a minimum of basic homework. It's a silver seal. The typical motif on a silver seal is heraldry - so open a book about heraldry. It's not rocket science. What on earth did he think it was? Some sort of weird trophy?


"That was only part of my critique though, & it's telling you've chosen not comment the main issue here. You part-quote me in relation to these two tweets, but seem to miss that i was drawing attention to @PortantIssues [Paul Barford]"

Huh? Please try to stay focused. Paul and I are not joined at the hip. Paul has his blog, I have my blog. I am discussing the post on my blog. Whatever your "main issue" may be, it has no connection to my post on my blog.


"more worryingly, in your defence of @PortantIssues blog [...] you make no reference to the very offensive language used ['negroid'] ..."

See my comment above. That word makes me uneasy and I personally avoid any terminology that may be insensitive but the term is still used by other people. Indeed, before going ballistic on Twitter, you might want to have a word with your own colleagues at the British Museum (e.g. see Curator's Comments: here, here, here).


"However, you seem sadly to have missed the point of my thread. We encourage, welcome, debate & discussion, but hyperbole and polemicism are not helpful, neither is accusing a heritage colleague of 'pseudo-archaeology', which I really think is unwarranted, & below you."

Please point to a genuine example of 'hyperbole' in my post. 'Polemicism'? I'm not sure you quite understand the difference between polemicism and justifiably strong criticism. Perhaps I expect a higher standard from a professional FLO associated with the nation's most prestigious museum than to cobble together a piece of unresearched rubbish and publish it on an academic website that the public would expect to be reliable. My post about it may have revealed a little of my exasperation but it was in fact very restrained (this current post may be somewhat less so!).

There's no need for "debate". The article is demonstrably crap. It's also very unfair to those of his colleagues who are more knowledgeable. If your friend wants to write about the slave trade, I suggest he does his colleagues (and the public) a favour, engages in some basic homework, and finds an artefact that actually has something to do with it.

How utterly comical. Mr Westwood seems to think that we are some kind of conspirators against him. He has an odd idea of what is "offensive". (He's tried that one before, tried to get me thrown off the RESCUE Facebook group because of some imagined linguistic crime in a blog post, not on the group.) Anyway, the fact of the matter is that Mr Reavill read this artefact in the wrong way and incorporated that into his description, and then tried to gain virtue points for politicising it on the PAS blog. One wonders how many other over-interpretations there are in the PAS database...