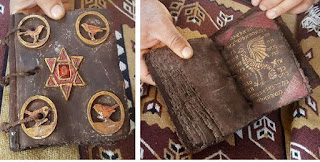 I see that yet another dubious artefact has been seized from 'smugglers' in Turkey ('Hebrew manuscript recovered from smugglers in central Turkey', Daily Sabah, 12 March 2019). Turkish authorities love to publicise their leading role in 'recovering' truckloads of antiquities supposedly stolen from war-torn Syria - but there's a slight hitch. Pretty much all of the 'recovered' objects proudly displayed in their photos appear to be tourist-grade fakes (just one example).

The latest seizure is no exception. Lots of these peculiar leather books (aptly dubbed 'Golden Brownies') have been turning up over the past few years (none from reliable sources). Despite the self-congratulatory smugness of the Turkish police at having brilliantly cracked a Syrian smuggling ring, most scholars regard these garish items as no more than modern fake tat aimed at gullible buyers.

What's more, it seems quite likely that they are being produced in Turkey itself rather than in Syria - so actually not 'smuggled' at all. One has to wonder whether the part in the suspects' statement about the object having been "stolen from a museum [unnamed] in Syria" was naively believed by the suspects themselves or conveniently inserted by those who pressured them into signing it. After all, what self-respecting museum would curate such rubbish?

Paul Barford has compiled a list of the characteristics of these 'Golden Brownies' and his note of their sources suggests that most of them appear to be originating from western Anatolia (and quite possibly manufactured there or transported from a centre further east).

It would seem that far from helping to thwart the looting of Syria's cultural heritage, all the Turkish authorities have really done is expose a thriving fake industry in their own country.

... with a hint of Turkish Delight I imagine.