Time for a thoughtful reduction in UK metal detecting? 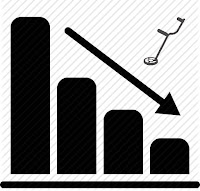 It is clear that the controversial pastime of metal detecting in the UK, even in cases where finds have been officially reported, has occasionally placed so much strain on limited public funds that the treatment of archaeological sites was compromised and fell short of best standards. One such case, for instance, concerned competing claims on the public purse by events at Creslow and Lenborough in Buckinghamshire during October and December respectively last year.

In light of the recent shrinkage of the Portable Antiquities Scheme (PAS) and other severe cutbacks in funding at both national and county level for the UK heritage sector at the present time, I wonder if British metal detectorists have accordingly scaled down the active pursuit of their hobby to allow scarce and already stretched resources to be focused on priorities such as dealing with genuine chance finds and discoveries or the urgent demands of emergencies and 'rescue archaeology', where sites are actually under immediate threat. There appears to be a strong case for thoughtful detectorists to curtail their digging in potential sites that are not under immediate threat and find other ways to amuse themselves in the meantime until funding to support their hobby in a reasonably responsible way has improved.

Many of those hobbyists proudly claim that the activity is primarily for the public good. Is this then a time for them to restrict their pastime willingly in response to the current situation or to simply carry on regardless?

"There appears to be a strong case for thoughtful detectorists to curtail their digging in potential sites that are not under immediate threat".

But the very essence of all metal detecting is to maximise finds rates by seeking out those places where that can be achieved, i.e. "potential sites that are not under immediate threat". Approximately none of them are going to do that, thoughtful or otherwise.

In my opinion, UK metal detectorists would be well advised to go "out of their way" to demonstrate dedication to responsible detecting in these difficult times.

At its best (which unfortunately was not all the time), the former PAS scheme and responsible collecting clubs did some valuable work in making important discoveries which were then archaeologically excavated.

Detectorists, in my view, could have a very interesting and enjoyable avocation if they considered themselves "scouts" for archaeology first, and were content with whatever the Treasure Act awarded them. In the past, such awards have sometimes been quite attractive.

I've known some British amateur archaeologists who received a great deal of satisfaction from their work, and think that detectorists might also enjoy such a role.

Anyway, you take this egg, and apply it to your lips...

"if they considered themselves "scouts" for archaeology"....

A phrase that puts them totally apart from Archaeology.

Archaeology needs no scouts searching randomly for more archaeology, it has enough, what it needs is careful, considered, comprehensive investigation not speculative prospecting using methods that yield little knowledge or worse.

The last comment by 'heritageaction' pretty much sums up my own feelings, what I was getting at in my post. My post was not of course aimed at detectorists who are affiliated with a recognised archaeological project but at those who pursue detecting purely as a hobby in a random, typically speculative, manner.