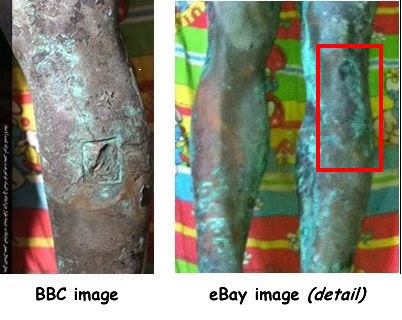 On the Conflict Antiquities blog, there has been some discussion recently over where an image of a detail of the Gaza Apollo statue would be located on the figure. The image (illustrating BBC News Arabic, February 2014) shows a distinctive area of corrosion and a rectangular depression over a cavity in the bronze surface (where a rectangular patch had been fitted in antiquity - or faked to look as if a patch had been fitted in antiquity).

The discussion has been rather intense ...

Whoa, dude! I'm not sure if the scholars have now resolved the issue but the location was immediately very obvious to me the second I saw the pictures (perhaps it's from years of doing all those "Spot the Difference" cartoons as a kid!). The area of the figure shown in the detail image is on the front of the left leg, just below the knee (outlined on the eBay image of the whole statue, left). My own composite of both images is at the head of this post.

I studied the corrosion of ancient bronze in some depth a few years ago (yeah, I've learned to embrace my inner geek rather than fight it) and the surface of the statue looks reasonably convincing in the newest images but we really need to examine the whole statue physically to know if it actually is ancient.