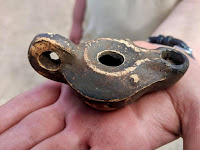 Loving this latest find announced yesterday (15 July 2019) by the Vindolanda Trust. The artefact was merely described as a "beautiful little oil lamp that was uncovered from the Antonine excavation" but I'll flesh that out a bit with my own analysis. The object is a Firmalampe (factory lamp), a late form of Loeschcke Type X, and was made in the Rhineland during the 2nd century AD. Although Trier was the prime production centre, the style and fabric here suggest it was possibly made in Cologne. Many examples bear a maker's mark in raised letters on the base, sometimes of an Italian maker with a branch workshop(?) in the Rhineland, but the marks are less common on this later style.

Oil lamps never really caught on to a large extent in Britain. British-made examples tend to be relatively crude and typically mica-dusted. A large proportion of the oil lamps found in Britain were imported, normally from Gaul, Germany or Italy. They are found mainly in urban or military contexts, and are very rarely found in any context at all after the 2nd or 3rd century.

The likely reasons for their comparative rarity in Britain are the cost of importing olive oil and their unfamiliarity outside urban or military environments. The preferred lighting in most of Britain consisted of open lamps (e.g. Loeschcke Type XI) burning animal fat, or possibly tallow candles.