Ha! That was an interesting outcome. Paul Barford, an archaeologist, highlighted a recent Twitter announcement by Jo Ahmet, the Finds Liaison Officer (FLO) for Kent:


Kent FLO:
Heard about this fantastic #AngloSaxon #Treasure #Donation to @MaidstoneMuseum ? Before It goes on display, get a sneak peak now and hear the finder talk about its' discovery.
kentonline.co.uk video/maidstone-museum receives
find more info below: finds.org.uk database record 917780
#ResponsibleDetecting #Thanks


Barford let the insane superfluity of hashtags (#Thanks - seriously?!) pass without comment but he did rib Ahmet about his apostrophe abuse in the phrase "its' discovery". When David Petts, a Durham academic, leapt to the FLO's defence, the FLO tweeted his gratitude:

Kent FLO:
Thank you David. Also, for once despite my specific learning difficulty I believe ” its’ “, in this context is correct. Being as the sentence is possessive....”it is discovery” is not what I had intended to say


He then followed that with a GIF of Obama shrugging, as if to ask why the fuss since he was perfectly right anyway.

Okay, it's a small point but having worked as a copy editor myself, I thought I'd just set the record straight. Without making any comment whatsoever on the FLO's content or anything else, I simply posted a single tweet to point out the correct grammar:

I thought no more about it but a couple of days later I idly wondered if he had thanked, or at least acknowledged, me. Here's what I found: 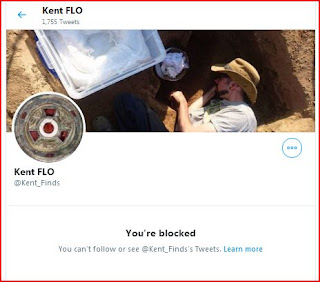 Whoa! A trifle touchy? If the representative of an organisation seeking 'outreach' to the public is so averse even to someone politely trying to settle a minor point about grammar, I can only imagine what the reaction would be if another member of the public had the audacity to question his attribution of a find. Something like this perhaps?

Fred Bloggs: I believe the artefact actually dates from the Roman period.

Kent FLO: You're BLOCKED! You can't follow or see my Tweets any longer!

I'm pretty casual with spelling and grammar in private emails to friends or even in posts on my personal page on Facebook. No big deal. However, perhaps the era of Political Correctness has changed everything but when I was at college we were told that public announcements are a different thing (Ahmet tweeted under the official 'Kent FLO' banner).

It was instilled into us that poor spelling and grammar not only diminish your own credibility, they reflect on the image and standards of the whole institution on whose behalf you are writing. Time to take EXTRA care - especially if you know you have a "specific learning difficulty". After all, finding correct spelling and grammar nowadays is only a mouse-click away.

I suppose you can take the other route - not give a flying fig about the image of the PAS or the British Museum - and I doubt an errant apostrophe is a capital offence even in the leafy suburbs of Kent but crudely blocking someone who merely confirms correct usage seems a bizarre overreaction. I've always had a fond respect for the institution behind the PAS and I'm not sure that somewhat paranoid response is the message its official representative should be sending out to members of the public.

Surely, a simple thanks (or even #Thanks) would have done the trick.