A member of an online antiquities forum recently posted images of a bust that had just appeared on the market (see Update below). It seemed to be Ancient Egyptian. The seller of the artefact gave the usual story: old estate, in the family since about the 1920s, no details known. In other words, it had zero real provenance. But the bust itself did look convincingly authentic. Was it real?

Some members of the forum noted a similarity to the famous Nefertiti bust in Berlin. Was it contemporary?

Well, the bust does have an Amarna look ... but it is neither Nefertiti nor even female. I noticed it bore a startling resemblance to another bust at the Neues Museum in Berlin, that of a young pharaoh (perhaps Smenkhkare, Akhenaton or Tutankhamun) and registered as Ident.Nr. ÄM 20496. 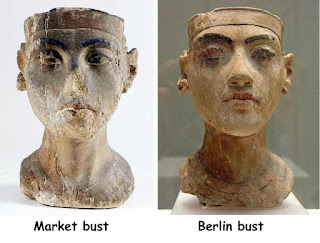 Taken in isolation, the market bust looks remarkably convincing. But of course the lack of real provenance was an immediate warning. Not only from a legal or ethical point of view. It is extremely unlikely that an artefact of that significance would not have been recorded and documented somewhere at some time.

I have now tracked the item down. It is being sold by Thomaston Place Auction Galleries of Maine, USA, on an online auction website and bidding is due to end on 26 August 2017.


Lot 695: ANCIENT EGYPTIAN STONE BUST
Head of Amun, New Kingdom, post-Amarna Period, Dynasty 18, reign of Tutankhamen, ca. 1336–1327 B.C. (in our opinion). Probably from Upper Egypt, Thebes. Sandstone with remnants of pigment, having refined features, portion of flat top cap and indication of beard, now missing. The features resemble those of Tutankhamen, indicate this was probably his commission, as part of the reconstruction of the temples. 8 1/2" tall. Loss to nose, scratches and chips, nice age patina.